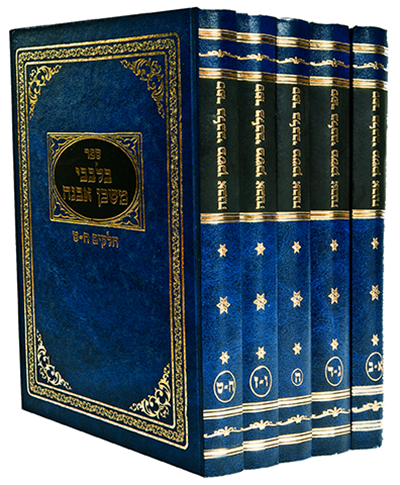 The Rav’s  nine volume series entitled “Building a Sanctuary in the Heart” or in hebrew בלבבי משכן אבנה focus on building a sensory connection with the Creator. These nine volumes of the “Bilvavi” sefarim can be divided into three parts:

1. Parts 1, 2, and Part 5 (specifically, the section that deals with the matter of talking to Hashem, page 5 – 102). The general basis for all of these volumes is the idea of peshitus, “simplicity ” which is expressed through emunah peshutah– simple, unquestioning belief in G-d.  The first step “Clarifying the purpose of life” in Part 1 should preceed all other steps.

Therefore, it is recommended to first peruse Parts 1 and 2 and the first section of Part 5  and to review these parts several times. After that, one should implement these ideas practically, according to one’s own individual “make-up.”.

How should one study these sefarim?  Generally speaking,  a person needs to review the sefarim [Parts One and Two] several times, and then  implement the stages practically, step after step. Most people’s daily schedules are very hectic, but each person must set find some “quiet time.”A person does not need literally to spend an “hour” [60 minutes] of time on this. Many times Chazal use the word “shaah” which implies an hour, but it does not literally mean an “hour”. The Rav has given specific guidelines as follows:

After one gets the general picture, it is recommended that one learn a section or two from the sefer every day, and then review it several times. One should review it on an intellectual level and also on an emotional level, sometimes with passion and sometimes with a quiet calmness. One should do so until the words have been absorbed well in his thoughts, and in the calm, refined emotions in his heart. It’s appropriate to do this for 10 minutes a day, or a little more.

After one completes a section of the sefer (for example, the chapter about “Creator and the Creations”), one should make an order of the steps of avodah which he will try to implement practically, as described in the sefer.

Besides this, it is obvious that it’s appropriate for a person on any level, and throughout one’s life, to learn the classic, fundamental sefarim, of the earlier and later centuries, so that one can know and recognize the ways of our Sages and be able to go in their footsteps, for all of one’s life. [see here for a list of these sefarim]

it would be appropriate before going to work to learn these sefarim for a few minutes as described above. One should return his thoughts every so often throughout the day to a fundamental point [described in the sefer] so that this thought can accompany his mind and feelings throughout the day. One should stop his thoughts for a few seconds daily and “put” his mind into a point described in the sefer. (A father who needs to take care of his kids should refer to Point 3 below.) The goal is that one needs to enter into all of this from a serene place in oneself.

If possible, she can get up a bit earlier in the morning before the alarm clock goes off, and sit in a quiet and calm place, and do the above. Every so often throughout the day she can pause her thoughts and think about a point described in the sefer.

4- For a stay-at-home mother

After things are calm in the house, she can do as above, and also to read from the sefer 3 times a day for about 2 minutes. If she can do so before the day begins, that’s better. Every so often she can pause her thoughts and think about a point in the sefer, and if possible, she should do so in a relaxed manner, while drinking something, so that she can be involved in the sefer in a relaxed mode.

She can do as explained in Point 3 above [regarding a working woman], and study the sefer in the afternoon. If she doesn’t have such a choice, she should study the sefer before going to sleep. Slowly after getting used to this, if possible, she can begin the day with studying the sefer, as explained earlier. Once a day, she should pause her thoughts and think about a point in the sefer. Gradually she can train herself several times a day to do the above, until it becomes a consistent part of her schedule, several times a day so that this will come more naturally.

During the time that one sets aside for quiet reflection, it is important for a person to reflect on all of the previous steps which one has already been through and acquired until now, so that one remains consciously aware of them. Every once a while, a person should also set aside to reflect about a specific level he has worked on and acquired, if he feels a need to do so – whether it is because he feels a burning need in his soul to do so, or whether it is because he feels that he has noticeably slackened off in that particular area.

Needless to say, it is highly recommended and important, that besides just reading the sefarim, you should seek to actualize the lessons, even if only a little. Without practically acting upon what you’ve read, it is simply an “emotional high”, which feels uplifting, but which won’t last. Therefore, if possible, it would be better for you to review from the beginning everything you have read so far, with emphasis on trying to actualize what you are reading.

At a deeper level, a person should eventually penetrate to the very essence of the soul, where seeking closeness to Hashem is not only “second nature”, but “first nature” for the soul. As pointed out before, a person needs to set aside special time for each kind of self-work. Each area of self-work requires its own period of time where one works on it, and one should not mix one kind of self-work with another. Generally a person should not work on two areas at once, because the secret of success is to stay focused.

If you do not understand certain lofty concepts which the Rav discusses because it is above your current grasp but you do get a certain “gesmach”  (vitality) from it, then there is certainly a connection you are having to the spirituality of the concepts described  in spite of the fact that your connection to the concepts is incomplete because you aren’t expressing them in any of your actions.

Regarding reviewing these sefarim/shiurim, the Rav advises to set aside a few minutes a day [for reviewing]. On a “vacation” day, you can spend more time reviewing. It should only be done according to your current capabilities. The main thing is to gain a wide expanse and depth into the sefarim of the Sages throughout the generations.The Rav has emphatically stated, “In no circumstance should you limit yourself only to these sefarim.”

[Based on the Rav’s responses to several questions on the Bilvavi Series www.question.bilvavi.net]